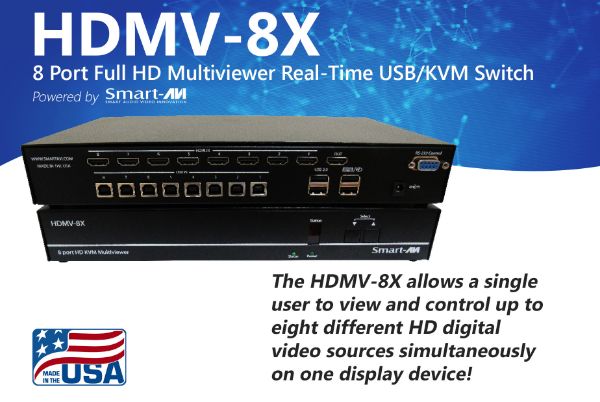 The HDMV-8X is the latest member of SmartAVI’s HD Multiviewer series of products. The HDMV-8X allows users to view up to eight different HD digital video sources on one display device simultaneously.

HDMV-8X also supports USB keyboard and mouse functionality, allowing the user to access all eight sources from one KVM set. Connections to video sources are managed via HDMI or with DVI adapters, with advanced viewing options such as dual-mode, quadmode, full-screen mode, and more. Use this device to simplify the management of multiple video sources by accessing and controlling them from a single set of controls on one display.

The HD Multiviewer series can be used in many applications that require real-time monitoring of multiple devices, like HDTV, DVD players, cameras and computers. It is the perfect solution in situations where a user needs to monitor several sources at the same time. For instance, In Air Traffic Control environments, several computers are required to monitor the progress of flights and the subsequent flight information. With the Smart-AVI HDMV-8X, the user is able to manage each computer and monitor the progress without having to switch between sources, making it the perfect solution for multitasking!